The First Reunion of the Class of 1585

In 1926, the alumnae of the North Carolina College for Women (now The University of North Carolina at Greensboro) were making plans for their class reunions. As these preparations were being made, it occurred to some of the alumnae that the celebration should include those students who had attended the woman’s college but had never graduated, or were never officially associated with a reunion class. This honorary group was christened the “Class of 1585.” This unusual name was a reference to the state’s early history, when Sir Richard Grenville’s English ships landed on the coast of what is now North Carolina. 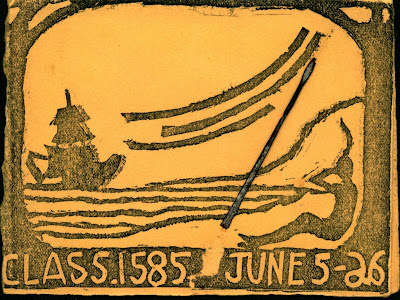 The first “reunion” of the Class of 1585 was held on June 5, 1926, during the celebration of Alumnae Day. To mark the occasion, there was a luncheon given in the Spencer Residence Hall dining room. In keeping with the 1585 theme, large centerpieces were fashioned in the image of Elizabethan ships. The tables were decorated with vases of daises (the school flower), with individual blossoms spelling out 1585 – 1926. For a special remembrance of the day, guests were presented with a small booklet created by students in the college’s art department. On the cover was a hand-drawn representation of a ship being greeted by a young Native American woman, while the interior contained the day’s program and a photograph of the guests of honor. Those being honored were administrators, professors, and staff members associated with the college’s early history. They included Miss Viola Boddie, Miss Laura Coit, Mr. Edward Forney, Dr. Julius Foust, Dr. Anna Gove, Miss Minnie Lou Jamison, Mrs. Lula McIver, and Miss Mary Petty. 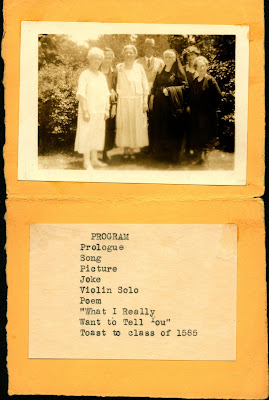 Over ninety guests were entertained with a program which paid tribute to the eight guests of honor. Continuing the theme of settling a new land, these educators were represented as champions of learning and “rescuers of the maidens” held captive by ignorance. In thanks, their former students presented them with “love, loyalty, reverence, and gratitude.” The luncheon’s entertainment also included a song by Miss Molly Matheson Boren and a commemorative verse by Miss Eleanor Watson Andrews, as well as Miss Vaughn White Holoman’s “series of word pictures sketched with the delicacy and precision of a cameo, [of] the eight ‘founders’ of the ‘settlement.’”


The moving program ended with each attendee drawing the name of one of the eight honorees and completing the phrase, “What we really want to tell you…” on a small sheet of paper. These kind thoughts were later collected and incorporated into a commemorative book. The event concluded with the guests toasting the Class of 1585 with best wishes and the hope that the tradition would persist.  For the next several years, the Class of 1585 continued to hold alumnae luncheons with the other college classes, but by the 1930s, this seems to have come to an end. Only one of the hand-drawn booklets survives as a testament of the class’s first reunion held on that June day in 1926.