Today's post was written by Kristen Thomas, a senior history major. Kristen interned in Special Collections and University Archives during the Spring semester, and constructed both a physical and online exhibit (http://library.uncg.edu/collection/exhibits/Campus_Literary_Societies.aspx) on the history of campus literary societies. Here, she writes about the founding and activities of these organizations.

Today, there are dozens of student groups to choose from on campus. But, back when The State Normal and Industrial School (now known as UNCG) was first founded, there was no such thing as campus organizations. That changed when President Charles McIver discovered a group of students had created their own sorority in secret.

Sororities had already been banned on campus, with McIver believing that they would lead to students feeling left out. McIver’s goal was to make sure all students could be included, emphasising his democratic approach to education. However, there were many who wanted a sorority-like group on campus. So McIver decided to create the Literary Societies.

He charged two students, Mary Arrington and Alice Green, with organizing these groups with the help of certain faculty members. They decided that the student body would be divided in half, each belonging to one of the societies. They were sorted at random, with names being drawn from a hat.  Once the students had been grouped, they settled to finding a name. The group created by Arrington was named the Adelphian Society and the one by Green the Cornelian Society.

Each society created their own secret initiation rites and rituals, which were only known to the members of the group. For a while, even many of the officers were kept a secret. Despite the secret nature of the societies, they did come together in order to produce plays, debates, and simple luncheons, sometimes in honor of the other society. For the first 25 years they were on campus, they facilitated much of the activities outside of the classroom.

In 1918, the campus had grown to such a size that the two societies were becoming too large to function as they did before. A third society was chartered, with members being pulled from the already existing societies. They became the Dikean Society and adapted smoothly into campus life. A fourth, the Aletheians, was added in 1923. Both societies created their own rituals and secret initiations, and functioned much like the Cornelian and Adelphian societies.

By the 1930s, the influence of the societies has waned as other groups had taken shape on campus, such as the Student Government Association and the YWCA. They still held an important role as social groups and the election of marshals, a function they held until their disbandment.

As time went, the students began to group themselves more by class than by societies. Many felt that the societies had grown too large to continue to serve the campus effectively and participation had waned in favor of other groups. In 1953, after a vote was taken across campus in favor of disbandment, the presidents of all four groups formally agreed in a letter submitted to the university to bring the end of the societies.

Posted by Unknown No comments:

While the February 1960 sit-in at Greensboro’s F.W. Woolworth store downtown is well known, fewer people are knowledgeable about a second round of protests that escalated in Greensboro in the Spring of 1963. A number of Woman’s College (WC) students participated in the 1960 sit-ins, but the 1963 movement hit the students of WC a bit closer to home. While the protests stretched around town, one aspect of the movement was primarily targeted at businesses located on Tate Street, in the area known as “The Corner.”

On February 27, 1963, 23 WC students (most African American) wrote Chancellor Otis Singletary asking him to immediately begin working towards desegregation of the Corner, a business area adjacent to the WC campus. The students wrote “This college has accepted us as students, therefore, as members of the Woman’s College community. Since we are accepted as such, we feel that the college has the responsibility of seeing that we receive the same privileges as any other member of this community. As of now, we are not granted such opportunities.” They added that “the decision to accept Negro students to Woman’s College implies the decision to give them your full moral support, not just a limited, partial support.”

The letter to Singletary earned a swift response. On March 13, he set up a meeting with a local business owner and Dean of Students Katherine Taylor. In the meeting, Singletary stressed that he recognized that he had no official authority to dictate policy to the business owners of the Corner, but he wished to request “unofficially that all students at the Woman’s College be served at the Corner eating places and admitted to the Cinema Theatre.” Singletary warned that, if the present segregationist policy continued, the students would likely begin picketing and boycotting these businesses.

On that same day - March 13, 1963 - the WC Student Government Association passed a resolution urging Singletary to "use his authority and influence as a college official" to convince owners of business on the Corner to desegregate their facilities. Specifically, they called out two restaurants - the Apple House and the Town and Country – as well as the Cinema Theatre on Tate Street. SGA’s resolution carried the same argument as the letter from the students to Singletary – the WC is integrated and its local businesses should be too.

Three days later on Thursday, May 16, 1963, the WC SGA issued a call for "selective buying campaign" directed at the Tate Street merchants. On that same day, the Greensboro Chamber of Commerce and the Merchants Association passed resolutions calling for equal access in all local businesses. Coinciding with a week of massive marches and demonstrations around Greensboro, approximately two dozen WC students picketed the offending Tate Street businesses they considered part of their campus community. One local businessman wrote Dean of Students Taylor that “it was disturbing, to say the least, to observe the fine looking young ladies harassing these local businessmen by parading before their places of business today … They appear determined to destroy our way of life and some of the business people whose taxes are educating them.”

Rallies and protests continued throughout Greensboro during the summer months. On May 22, 1963, more than two thousand African Americans of all ages and classes silently marched to downtown Greensboro to show their dedication to achieving racial equality, making it the largest march in the city’s history. A few days later, 1,643 white residents of Greensboro allowed their names to be published by the Greensboro Daily News in a full-page and partial-page ad in support of the integration of Greensboro’s businesses. On June 4, over five hundred students and adults joined North Carolina A&T student body president Jesse Jackson in a silent march. The next evening, Jackson led close to seven hundred African Americans to City Hall and was charged with “inciting a riot.” Protests continued throughout town, leading Greensboro Mayor David Schenk to issue an appeal to all businesses to desegregate immediately and for activists to halt their protests.

By June 13, eight more Greensboro restaurants chose to desegregate, making approximately one-quarter of local establishments open to African Americans. In July, the Greensboro Chamber of Commerce and the Merchants Association insisted on a resolution calling for the immediate desegregation of all public spaces. And by the fall of 1963, close to 40 percent of Greensboro businesses had been integrated – including the institutions on Tate Street.

More information about the 1963 desegregation protests and marches – including more images and original documents – can be found at Civil Rights Greensboro.

Posted by Erin Lawrimore No comments:

Fraternities and sororities at UNCG

Prior to the founding of the State Normal and Industrial School (now The University of North Carolina at Greensboro) in 1891, Charles Duncan McIver was very supportive of the notion of societies for the female students.  In 1893, the Adelphian and Cornelian became the first two literary societies on campus and almost all of the students joined either one of the two groups.  In the years following, a joint committee of students would divide the list of new freshman girls and place them within either society.  Society invitations and initiations became an exciting time for each student as some expressed great joy in their placement while others were visibly upset. In 1896, fourteen girls attempted to create their own secret society tied to a Greek letter sorority.  Upon discovering this, McIver quickly reproached the girls and demanded they disband the group or face expulsion, believing such exclusive secret organizations were inappropriate to the mission of public education.  Two other literary societies would later be established on the campus as student body population continued to grow.  In 1918, the Dikean Society was founded and the Aletheian Society was later established in 1923.  The societies would continue to operate as part of student life on the campus until 1953 when they were abolished by a student vote.

The next several decades saw a general distain by the administration regarding the establishment of a Greek system.  In 1975, believing social sororities (and later fraternities) to be elitist, divisive, and irrelevant to academics, a faculty committee voted against the issue of whether to establish a Greek system at UNCG. However, recurring student interested prompted a second study in 1977-1979 and found that thirty-one percent of the student population would consider joining a fraternity or sorority.  With such support, the Board of Trustees approved a five year trial period for a Greek system and in 1980 the first rush took place. By the fall of 1981, there were seven fraternities and seven sororities officially recognized on the campus.  With continuing interest and growth, the five year probationary period expired and a Greek system was official established at UNCG in 1984.  As of 2012, there were ten social fraternities and social eleven sororities on the UNCG campus. 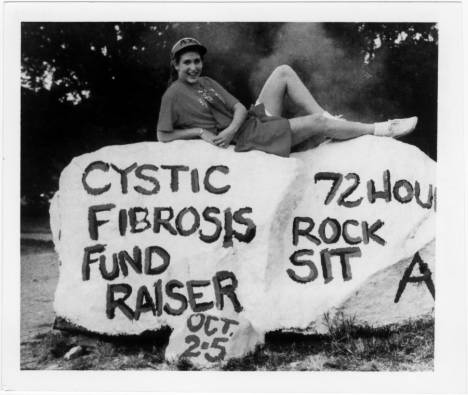 One key iconic symbol that is shared by UNCG fraternities and sororities is the Rock.  The Rock is a 12.7 ton boulder that was imported to the campus from a rock quarry in nearby Jamestown by the Alpha Phi Omega service fraternity in 1973.  It was placed between the dining halls and dormitories and would serve as a message board for the various fraternal organization as it was continuously painted over again and again.  There exists an unwritten rule that a groups message has to stay up for twenty four hours before being written over.  Prior to the Rock, students would paint and decorate the statue of Charles Duncan McIver as way to promote their messages.  However, after years of continued abuse, the statute was beginning to deteriorate thus prompting a new method of communication.

Posted by SMulligan No comments: