The staff of the Martha Blakeney Hodges Special Collections and University Archives wishes everyone a happy holiday season! We're taking a break this week, but please join us on Monday, January 8th for a new Spartan Story.


Posted by Erin Lawrimore No comments:

Laura Weill, Class of 1910, was one of the most illustrious alumna to graduate from the State Normal and Industrial College (now the University of North Carolina at Greensboro). Weill was born on September 19, 1888 in Wilmington, North Carolina, to prominent lawyer Solomon Weill and his wife, Elinora. In 1906, she entered Dana Hall School, a preparatory institution for Wellesley College, and transferred to State Normal the following year. She distinguished herself at State Normal as the president of her graduating class of 1910; Editor-in-Chief of the State Normal Magazine and The Carolinian; and the Vice-President of the Athletic Association. She was even the author of The College Song, which focused on loyalty and the school’s devotion to service. Service had been an important part of State Normal’s mission, but it was the motto of the Class of 1910, and they “willed it” to the college during graduation.

Weill also showed an interest in women’s rights while she was at State Normal, penning “Self-Government in Women’s College,” for a school essay. Upon graduation, Laura Weill taught high school in Wilmington, North Carolina, but then returned to Greensboro where in 1917, she became the first woman on the Greensboro School Board. Weill married lawyer David Stern (1882-1915) and they had one child, Frances (1913-1993). After Stern’s death, she married Julius W. Cone, a member of a prominent Greensboro textile family and president of Cone Export Commission Company, a division of Cone Mills. They had two sons, Edward Toner (1917-2004) and Julius Washington (1920-1925).

Cone continued her interest in educational causes, and also became a strong advocate for women’s rights, serving as Treasurer and Vice-President of the Greensboro Equal Suffrage League. She also worked with other North Carolina suffragists, such as Gertrude Weil and Louise Alexander, to push for the ratification of the Susan B. Anthony Amendment. She joined in their disappointment when the North Carolina legislature postponed the vote on suffrage, thus allowing Tennessee to become the thirty-sixth state to ratify the Amendment, the number required for women to gain the right to vote. The Amendment was not ratified in North Carolina until 1971.


Cone remained active in the community, promoting women’s rights, labor, and racial equality. When Woman’s College (now the University of North Carolina at Greensboro) librarian Charles Adams was criticized for allowing black students from Bennett College and North Carolina A & T to use the school library, Cone strongly defended him. She also continued to support local education initiatives, serving on the Board of Trustees for Bennett College, a local historically black liberal arts college for women, for almost three decades. She also served for twenty-two years on the Board of Trustees of her alma mater, The University of North Carolina at Greensboro (UNCG), and as a member of its executive committee from 1934 until 1953. When discussion began regarding the possible co-education of Woman’s College, Cone opposed it, as did many of the administration faculty, feeling that there would always be a place for a public women’s college. Her influence on campus also included architectural choices. Cone's taste in architecture was traditional and she preferred a more cohesive campus plan, continuing the Georgian design prevalent in many of the buildings on College Avenue. Ironically, she would have a residence hall named in her honor in 1967, reflecting the typically modern architecture of the time.

Her interests also included community health, and she was a member of the Board of Trustees of the Moses Cone Memorial Hospital, where she died in 1970 after a brief illness.
Posted by Kathelene McCarty Smith No comments:

From the early 1960s until the mid-1980s, the UNCG campus hosted an annual Moravian Lovefeast and Candle Service during the first weeks of December. Music, scripture readings, and messages delivered by local ministers were featured during the services, which were typically held in the Elliott University Center's Cone Ballroom. The services drew students, faculty, staff, and community members.

It was on a December evening in 1963 that the first Lovefeast was held at UNCG. Two Winston-Salem students, Phyllis Snyder Bargoil (class of 1964) and Almeda Tesh Dalton (class of 1965) invited their hometown pastor, the Rev. Thomas Presley, to Greensboro to lead the celebration. Almeda's father made the wooden serving trays which were used in the UNCG service until at least the early 1980s.

Twenty-eight people attended this first gathering, including Dean of Students Katherine Taylor, who encouraged the students to plan another Lovefeast the following year. Rev. Presley returned the following year to lead the Lovefeast, which quickly grew in popularity. Around 1967, the Lovefeast expanded from a single night to two nights of services. Eventually tickets were required (at no charge) to control the number of worshipers who attended each evening's service. By 1977, three nights of services were held in order to accommodate the crowd. It was estimated that the 1985 Lovefeast services drew over 600 attendees.

One of the central activities during the UNCG (or any) Lovefeast was the breaking of bread, signifying the union and equality of the worshipers. In the UNCG services, this included the sharing of traditional Lovefeast buns and coffee. Female servers would distribute the buns, while male servers carried trays of coffee. A Moravian blessing was said and worshipers would eat while the choir performed. The December 11, 1974 service, for example, featured a performance by the University Women's Choir of "Gloria," arranged by Benjamin Britten.

After the delivery of a message by a local minister, the lights were lowered and beeswax candles were distributed to the attendees. Candles remained lit as the worshipers departed the service. While the lit candles represented the sacrifice and love of Christ, the students at UNCG adapted them for another purpose. According to an interview with Rev. Presley in 1979, "If you carry the lighted candle back to your room, the wish you make will come true." At UNCG these lit candles moving across campus also foreshadowed the luminaries display, which typically occurred soon after the Lovefeast. 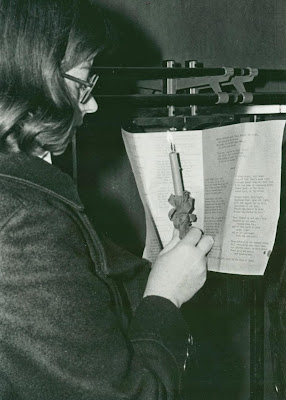 The last reference found in University Archives to a campus-sponsored Moravian Lovefeast is found in the 1986 Pine Needles yearbook. In reference to the services held in December 1985, the article notes, "fighting against outside claims that the feast - in its presentation of a Christian message and hymns - violated the spirit of the separation of church and state, administration members asked those delivering the 'message' at the two nights of ceremonies to look for a more 'universal focus' in what they said." Rev. Ron Moss of the Wesley-Luther House and Father Jack Campbell of the University Catholic Center led those services.

The Pine Needles article concludes with a quote from a student attendee, who left from the Lovefeast to study for final exams in the library. "When I came to the Festival I thought it would just be a social or something - or maybe a church service. But it wasn't. It was just a lot of people getting together to enjoy something beautiful. Sure, I heard people talking about how it was wrong, and how it violated students' rights, but I can't help but think that something as beautiful as that was couldn't have done anything but helped."
Posted by Erin Lawrimore No comments:

Lighting the Campus with Luminaries

At 7am on a December morning in 1969, a number of UNCG students gathered in front of the Elliott University Center with 2000 candles, white paper bags, soufflé cups, and a really big pile of sand. With these supplies, they started a campus tradition which continues today: the annual luminaries display.

Before the project could begin, Kim Ketchum, president of the UNCG senior class of 1970, presented the idea for the display to Katherine Taylor, dean of students, and to Terry Weaver, manager of the Elliott University Center. They agreed to allow the students to proceed with the display, and ultimately, the project received the blessing of Chancellor James S. Ferguson. Chancellor Ferguson provided money to purchase the sand and candles from his discretionary fund. The white bags and soufflé cups were donated by the cafeteria.

Throughout the day, students stopped by to help assemble the luminaries. They carefully placed sand and a candle (balanced on the soufflé cup) in each bag. Ketchum and six other students used a Physical Plant vehicle to position the luminaries strategically along the campus streets. Around 6pm, students emerged from the residence halls to light the candles. As the luminaries burned, groups sang Christmas carols around the campus and gathered to drink hot cider and hot chocolate around a bonfire that burned in a metal pit.

Ketchum recalled, “It was a success then, and it’s very gratifying that our class started a tradition that endures to this day. I think that this probably was the first large luminary display in Guilford County, and the rest of the area picked up on it.”

UNCG’s sororities and fraternities carry on this tradition today, preparing the luminaries, lighting them, and cleaning up. In 2011 sustainable luminaries were introduced, which decreased prep-time and eliminated potential hazards. And, as is part of the campus tradition, when the candles burn out, students return to their studies, as Fall semester final exams loom in the immediate future.
Posted by Erin Lawrimore No comments: