Gregory Ivy: The Legacy of a Non-Conformist 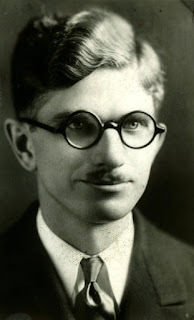 To the extent that UNCG is known as an “arts school” in North Carolina, much of the credit for that reputation can go to Gregory Ivy (1904-1985). “Consider,” wrote his student Lee Hall, “what the world and North Carolina were like in the Great Depression, what the Woman’s College was about…when Gregory Ivy arrived in his super-modern space craft and -- seeming to barely speak the language of the country he had invaded -- urged the female natives to seek and value freedom, to question what they had been taught was unquestionable, and to notice that most authority figures were swaggering about as buck naked as the emperors they imagined themselves to be.”1  According to Lee Hall, “Ivy might as well have been an alien when he arrived in North Carolina” in 1935, to found the art department of the Woman’s College (later UNCG).2

Ivy was a Columbia University-educated artist, a modernist influenced by surrealism and the Cubists. As such, according to Hall, Ivy was always advancing challenges to the status quo, and he made the newly minted art department at the Woman’s College into “a mini-cosmos of the humanistic world he envisioned.”3  With this guiding philosophy, Ivy influenced generations of students, and shaped art education at the Woman’s College. In 1938, Ivy established a summer art colony held at the Beaufort Summer School through the mid-1950s, which focused on landscape painting. In 1941, with the help and support of community members, Ivy established an art gallery, now known as the Weatherspoon Art Museum. Ivy’s connections to the wider art world meant that he could bring nationally known artists to the Woman’s College. This is how the sculptor Maurice Glickman, for instance, anchored the inaugural exhibit at the new Woman’s College Art Gallery in 1941. In subsequent decades, under Ivy leadership, the Weatherspoon Gallery became nationally known in the art world as a leading showcase of modernist art. His legacy is still felt in the Arts at UNCG, and in the Weatherspoon Art Museum.

Lee Hall met Gregory Ivy as an art student at the Woman’s College.4  Hall would later recall that in 1950s “McCarthyism” America, Ivy “did not fit in, he did not conform.”5  Ivy had built the UNC system’s first department to award a bachelor’s or a master’s degree in fine arts, and assembled an art department of very talented colleagues. According to Lee Hall, “these “liberal” or “arty” or “pinko” faculty…kept the gossips and scolds stoked, and caused among the keepers of the status quo near-terminally raised eyebrows and pursed mouths.” Lee Hall recalled that students seemed to either love or hate Ivy, and recalled the gossip of her fellow students about him. From students who liked him: “He’s hip.” “He has Negro friends.” From students who hated him: “He’s an atheist and communist.” “He believes in sex before marriage.” “He’s going to be fired.”6

Gregory Ivy left the Woman’s College in 1961, after twenty-six years, to work as design coordinator for an architectural firm in Greensboro. He resigned with an angry letter to acting-Chancellor W.W. Pierson bemoaning the lack of funding for the art department, and the apparent disinterest of the College to fund it. “The Art Department,” he wrote, “is the only department here which is not housed, and yet, it is the best known nationally of all the departments.”7  His resignation letter detailed all of his grievances with the administration, and continued, “I feel that I can no longer assume the responsibility for maintaining decent standards under these conditions. The quality of the work done under these really outrageous and scandalous conditions suffers.”8

In 1965, Ivy left Greensboro to head the art department at California State College in Fullerton. Over the course of his long career, Ivy participated in exhibitions with major artists such as Edward Hopper, Jackson Pollack, and Marc Chagall, and at institutions including the Brooklyn Museum, the Metropolitan Museum of Art, and the Art Institute of Chicago. The Weatherspoon Art Museum houses a major collection of Ivy’s work.