If you have ever walked the length of College Ave (in the direction of Market Street), you will eventually find yourself crossing a metal and concrete bridge. The structure and placement of the bridge creates for the walker the illusion of floating through and above a wooded section of Peabody Park. As you pass through a line of tree tops, you begin to see hints of a brick and glass structure located just beyond the bridge. The building’s multi-story entrance beckons students, faculty, and visitors to pass through its glass doors and experience the energy and creativity of music education as well as the wonders of musical performance. It is the Music Building. 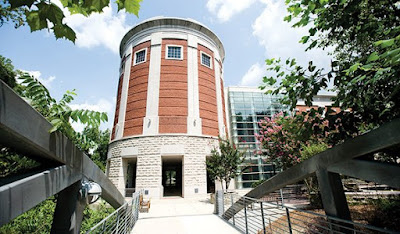 The Music Building is situated at the corner of West Market Street and McIver Streets. Drawing on the existing landscape of Peabody Park, the design team built the three-story structure into an existing hill. Thus, the 130,000 square foot building blends into the surrounding landscape and conveys a sense of permeance. Would you be surprised to learn that the building only opened in 1999?
Prior to the building’s construction, the music program had struggled with growing pains and operated out of seven different buildings on campus. Faculty and students had to walk from building to building to study, rehearse, and perform. For example, the Brown Building on Tate Street housed the program’s administration and instruction spaces. The Brown Building Annex housed rehearsal spaces, the music education library, and faculty offices. Three separate campus-owned houses were used as offices and practice spaces. Finally, music performances were held at the University’s Auditorium and the nearby Curry Building. Thus, the hope was to bring together all the program’s functions and house them in one academic building.

The planning and construction of the Music Building in Peabody Park reflects the forward vision of its administrators and faculty. Starting in 1977, the music school Dean Lawrence Hart charged a committee to consider the needs of the program and the feasibility of constructing a new campus building. The committee’s work stopped with the Dean’s retirement. In 1984, with the appointment of Dean Arthur Tollefson, there was a new push to study the program’s current and future needs. Dean Tollefson himself articulated a vision of a building that provided both the “appropriate tools” and space to support a world-class music education.

Over a period of years, the University’s Board of Trustees worked to obtain funding for a new building. With the passage of the $310 million North Carolina University’s Improvement Bond by voters in 1993, monies were secured for various capital improvements on campus as well as the construction of a $23.4 million music building. In February 1994, the Board of Trustees voted to select the architecture firm Calloway, Johnson, Moore, and West of Winston-Salem. This firm designed the building in association with Howard, Montgomery and Steger Performance Architects of New Orleans. Also in February 1994, the Board of Trustees selected the site of the new building. Surprisingly, the Board rejected Chancellor William E. Moran’s recommendation of constructing the new building on Tate Street (between the Weatherspoon Museum and the Norfolk Southern railroad tracks). Instead, they approved an alternative location for the music building on the corners of West Market and McIver Streets. The Board justified its decision by stating that the new site would provide the music building more visibility.

The selection of the West Market and McIver Streets site was not fully embraced by all of the University’s faculty and students. For example, the Environmental Awareness Foundation (a coalition of students, faculty, and members of the surrounding community protested and expressed concern about the impact of new construction in Peabody Park. At the same time, this group did recognize the need for a new music school building. Several demonstrations were held on campus. In response to these protests, the University’s administration sought design changes and protective measures to minimize any impact on the flora and fauna in Peabody Park.

On August 1999, the new music building opened its doors to 50 faculty members and 500 music students.to its 500 students. The new building featured a 351-seat recital hall, a 120-seat organ recital hall, and a 140-seat lecture hall. One of the star features of the organ recital hall was a stunning 28-feet tall 1,900 pipe organ. The organ was fabricated by the Andover Organ Company in Methuen, Massachusetts. Additionally, the building contained faculty offices, classrooms, rehearsal spaces, recording studios, and a music library. The new building also adopted a range of new technologies. For example, the Wave (Wenger Acoustic Virtual Environment) Room stimulated the acoustics and environment of various concert halls around the world. Chancellor Patricia Sullivan formally dedicated the building on October 3, 1999. The afternoon-long event was filled with tours, demonstrations, and recitals.
Posted by Unknown