In an earlier blog post, the collaborative effort between architect Edward Loewenstein, Woman's College of the University of North Carolina students, and professionals in the building and construction professions, was detailed in the creation of the first Commencement Home. This post will continue to look at that effort as it moved into its second year.

Although there seemed to be less publicity for the second Commencement Home, the second home designed and built collaboratively by students, architects, professionals, and Woman's College was featured in the October 1959 issue of Living for Young Homemakers.
The article (titled, "a house with a college DIPLOMA"[sic]) describes the course in Residential Design as giving Woman's College's "art and home economics students the practical experience of planning a home from foundation to furnishings." The students were "assigned to committees undertaking specific study in orientation, space planning, electrical, mechanical and plumbing potential." Because the houses were always meant to be sold, students were given budgets that were realistic and marketable. The target budget for the 1959 Commencement House was placed at approximately $24,000. Apparently the price was right, since the house was immediately sold to Mr. and Mrs. Hinsdale in 1959.

Design principles laid out by the WC students included: areas zoned for family activities, stepsaving traffic pattern, visual spaciousness beyond actual square footage, easy maintenance, dramatic lighting, and climate-conditioning. Some of these principles are apparent in the house plan, which show well-separated living and sleeping areas, as well as a sunken living room, which helps to delineate the more formal dining room from the living room.
In keeping with the Modernist feel of the home, the interiors are decorated with period-appropriate furniture. Note also, the use artificial and natural lighting, which is both practical and fulfills the stated design principle of "dramatic lighting." 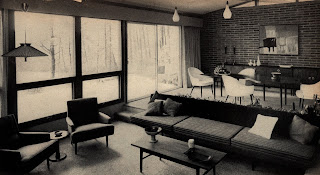 The exterior of the home also exhibits the design principles of dramatic lighting, easy maintenance, and climate-conditioning.
Like the 1958 Commencement Home, The 1959 Home featured measured advancements and innovations. One of those accomplishments which both the 1958 and 1959 home shared was the "Live Better Electrically Gold Medallion" an award from Duke Power Company for "electrical excellence." A wonderful announcement (sponsored by Duke Power) for the open house taking place on May 30-31, 1959 showed the electricity mascot, "Reddy Kilowatt," with the medallion and invited the public to view the Home.