As any researcher of LGBTQ+ history is aware, tracking a hidden population through the historic record relies upon extracting a narrative from rare and frequently cryptic fragments of information. Even though UNC Greensboro began as a college for women with records dating to the school’s chartering in 1891, unearthing even a passing mention of a LGBTQ-related topic in the official records of the university in its earliest years constitutes a major discovery. The first mention of homosexuality found in the historical record of UNC Greensboro (at this time, the North Carolina College for Women) appears in lecture notes from the Department of Physical Education dating to 1921. The content of these notes is crucial not only as early evidence that some students were taught a vocabulary to describe homosexuality, but also in understanding the model of sexuality students would be applying to their own identities.

The lecture notes (1) present a then plausible developmental model of sexuality. It is maintained that from ages 1 to 10, humans exist in a state of bisexuality, described in the notes as “... curiosity age. A trying out, a seeking and testing of parts of the body.” Homosexuality, which is defined in the notes as “Auto eroticism, or love of self,” occurs between the ages of 10 to 22, after which an individual will fully mature into a state of heterosexuality. Homosexuality, as an abnormal state, occurs when that developmental stage is arrested by same sex sexual gratification during the homosexual stage, not allowing an individual to grow into a healthy, heterosexual adult. 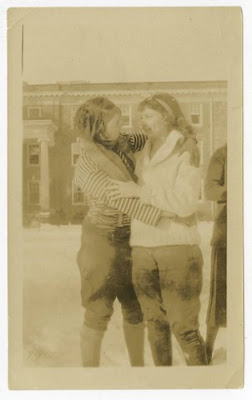 The notes focus intensively on the concept of “The Crush” among young women, in which a younger, more submissive woman might be attracted to an older, more confidant woman. Although it is stated that “Love between people of the same sex may be very beautiful,” the lecture warns that the woman with the crush could be drawn into “a condition of submission” or “a condition of weak-willness.” As future educators, the NCCW students receiving this lecture were advised to sublimate the infatuation with someone of the same sex through involvement with social groups and community organizations. Essentially, if a teacher was to observe homosexual behavior that would arrest a young woman’s growth into heterosexuality, they were to redirect the woman’s energy and work it out of her. To reiterate that homosexuality is merely a transition state to heterosexuality, it is asserted that there is “no truly homosexual individual in the world.” (2) In any case, the abnormal state of homosexuality should not be encouraged because it “is immature, non-developing [and] non-constructive,” as “No new life can come from it.”

Homosexuality, then, was an abnormally arrested state of development, and therefore, an illness. Homosexuality was designated a psychological disorder until 1973, sequestering much of the official record of lesbian relationships on this campus among students to the security of student health records. Even before the health record protections of FERPA, student health records were among the most confidential records on campus, and were not transferred to the University Archives as part of the institution's record retention policy. In other words, the records with the potential to be the richest sources for LGBTQ+ history at a university are the most restricted.

In terms of non-medical institutional records and private records, documenting non-heterosexual relationships among students presented a significant danger to both the early institution and the students. It is unlikely a university at that time would retain records documenting instances of discovered homosexual relationships among students for fear of scandal and damage to the institution’s reputation if such records became public knowledge. Personal diaries and letters in which students describe same-sex relationships constituted a great risk for a student, as such material, if discovered, could lead to expulsion from school (and perhaps far more severe consequences at home). For students and administrators at a small women’s college in the Bible Belt, discretion in documenting matters of sexuality was paramount, which is why such little information exists on the LGBTQ history of UNC Greensboro in its early years.

1. The faculty teaching from the notes is not identified. Lecture Notes. Physical Education Department (prior to 1920-1963) Subject File, Martha Blakeney Hodges Special Collections and University Archives and Manuscripts, University of North Carolina at Greensboro, NC, USA.2. The underlined word is underlined in the original material.
Posted by Stacey Krim