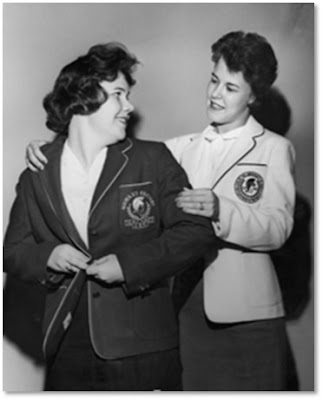 Oral histories conducted with early UNC Greensboro campus faculty provide rare glimpses into the lives of LGBTQ students, if only illustrating the population’s need to remain hidden for survival. An interview with Professor Key L. Barkley(1) reveals that early students were having lesbian encounters. Barkley (1900- 2001) was a faculty member in the Department of Psychology at the Woman’s College (now UNC Greensboro) from 1931 to 1949. Students would seek counseling from him because there was no office on campus where students could unburden themselves by discussing significant life events with any assurance of confidentiality. Barkley was hired as teaching faculty, not clinical faculty(2), but at the time of Barkley’s hiring there were no professionally trained mental health professionals on campus. Eventually, he would successfully petition for a professional psychiatrist position.

Students occasionally would seek guidance from Barkley about lesbian encounters with other students. Openly admitting to a lesbian experience or identifying as a lesbian on campus was dangerous. It is known that students were aware that homosexuality by some definition existed, but had no campus support they could trust to understand their personal experiences in context. As a psychological disorder(3), homosexual behavior could be used as pretext to expel a student as suffering from a mental disorder that could not be treated by campus medical staff. Barkley, before the hiring of a campus psychiatrist, was the closest to a mental health care professional bound by patient-doctor confidentiality available on campus, and students trusted him for his expertise and discretion.

Word spread that Barkley was providing counseling to students, and the Dean of Women(4) interrogated him. To her horror, Barkley admitted that some students were seeking counseling from him about their lesbian encounters. The Dean reported this information to Chancellor Walter Clinton Jackson. Jackson demanded that Barkley cease counseling the students, stating, "Why, young girls ought not to be talking to young men about this sort of thing."(5)  Barkley told Jackson that he refused to turn away a student coming to speak to him in need. After Barkley’s interaction with the chancellor, he was pressured by the Dean and his department head to seek a position elsewhere, which he would in 1949.

Barkley, as a professional, never divulged the secrets of the students who sought his advice, but in his oral history from 1991, he did offer his generalized opinion relating to lesbian experiences among students. In his own words,

“… you had three or four thousand women shut up over there in a coop. They were sexual as the dickens, at a time when probably they were probably burning as highly as they'd ever burn in their lifetimes. And there they were, highly sexual people with no normal sexual outlets. So there grew up a practice on that campus, as well as many other places, on allowing women a great deal of leeway with respect to homosexual expression with respect to each other—hug each other, kiss each other, caress each other, and so on. Innocent as you please… I told them in my estimation that these girls here are not extensively homosexual in nature, although I had quite a number of episodes involving such. I said, ‘These girls here are not homosexual. They’re just simply sexual with no heterosexual opportunity for expression… I believe that if they just get a chance for them to have heterosexual expression, in most cases their homosexuality will go “poof.’’"(6)

It is interesting to observe that Barkley’s description of the students’ sexual development reflects the model found in the 1921 lecture notes. Throughout most of his career, Barkley taught and practiced with the perspective that homosexuality was an abnormally stagnated stage of sexuality interfering with an individual’s maturation into heterosexual adulthood. This standpoint would be central to whatever advice he conveyed to student. Additionally, for students who took classes with homosexuality discussed as a topic, this would have been possibly the intellectual viewpoint from which they would characterize same sex attraction. It is very likely that Barkley’s assessment was correct in that some of the students experienced lesbian encounters as opposed to dedicated lesbian relationships. What may never be known(7) is how many students would have remained or continued in lesbian relationships if a definition of homosexuality as a natural form of sexuality was accepted at this time.(8)

2. Barkley did operate a private psychiatric practice when he was working at the University of Illinois.
3. The American Psychiatric Association did not remove homosexuality as a mental disorder from its diagnostic manual until 1973. The World Health Organization designated homosexuality as a mental disorder until 1992.
4. Harriet Elliott was most likely the Dean of Women at the Women’s College during this encounter (1935-1947), but Barkley does not provide the exact date of the event.

5.Barkley was forty years old at the time.
6. Oral history interview with Key L. Barkley, 1991, UNCG Centennial Oral History Project, OH003, Martha Blakeney Hodges Special Collections and University Archives, University of North Carolina at Greensboro, NC, USA.
7. It is possible in the future that personal papers (diaries or letters) or oral histories of alumnae from this time period may offer evidence, but none have yet been found.
8. Max Hirschfeld, at the Institute for Human Sexuality in Berlin, had already accepted the normality of sexual variation in the modern sense from approximately the 1910s onward. See Elena Mancini, Magnus Hirschfeld and the Quest for Sexual Freedom; a History of the First Sexual Freedom Movement (New York: Palgrave Macmillan, 2010.