Campus Regulations Through the Years: Part I 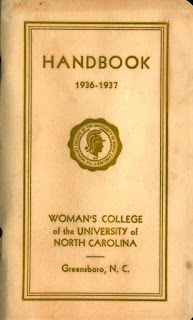 When college students move onto campus, they may no longer be subject to their parents' house rules,but they now have a whole new set of regulations by which to abide. All rules are intended for the students' and the school's protection, but they change with the times. Prior to the late 1960s, colleges and universities operated with the policy of in loco parentis, which is Latin for "in the place of a parent." Students, especially female students, were restricted from doing many things that would be considered basic rights by students today. I have looked through UNCG students' handbooks through the years and want to share some of my favorite regulations.

1898-1899
The student handbook for academic year 1898-1899 does not specify any rules beyond don’t destroy school property and pay for the property you accidentally destroy, but it does note that students should have a pocket in their school dress and to BE SURE “to remember that fine feathers do not make fine birds, and that what you make of yourself in College you will be so long as you live.” Gulp.

1912-1913
Codified regulations first appear in the 1912-1913 handbook, and only for the Library! The first rule, considered so important that it is in italic type is: “Absolutely no promiscuous talking in the Library.”

1924-1925
They were not kidding around in the 1924-1925 handbook! In that year the it was clearly printed on the title page of the Official Bulletin of Information: "Ignorance of the law does not excuse violation".

To dispel your own ignorance, I draw your attention to the following:

Students' whereabouts continue to be strictly monitored. For example,"All students are to register accurately and promptly before leaving campus and upon their return, except when going to neighborhood stores, to Sunday morning church services and on hikes not lasting more than an hour." I have no idea what the extreme hikers were supposed to do.

1936-1937
For the first time there needed to be rules for telephone calls! All calls were connected by campus operators and calls made from and to dormitories were “strictly limited to three minutes. Operators are instructed to cut off service at expiration of that time.” I guess those students must have texted a lot?

This year's handbook contains fewer regulations than previous (and subsequent) ones, but it does include some excellent suggestions that are as relevant to today’s students, such as:

1942-1943
By 1942-1943, there were regulations about radios (“can be played anytime in a student’s room and in the parlors provided they do not disturb others”) and smoking (“Students may smoke on the terraces and in the residence halls, except in the parlors and entrance halls.)

“Social privileges” such as “entertaining a caller” were now based on academic standing. Students with a “C” or better average were allowed more weekend and evening “engagements.”

Regarding riding in automobiles, on horseback, and on bicycles required parental permission and there were different rules for each class. However, all students require special written permission to ride in airplanes.