Part of the Women Veterans Historical Project collections, this letter was written by "Ella" to her family  on 13 December, 1941, six days after the Japanese attack on Pearl Harbor. We don't know anything about Ella except from what we can infer from the letter itself. She was a nurse with either the Army Nurse Corps at Tripler Army Hospital or with the Navy Nurse Corps at Naval Hospital Pearl Harbor.

In her letter, Ella comments that her family "maybe would be looking for a letter" from her.  I do hope she had already let them know that she was not a casualty of the December 7th attack, rather than making them nervously await news for a week!

" Yes, it happened here; the thing that everyone in the country predicted - that is everyone but the people living in Hawaii. We sat her smugly satisfied that nothing could happen to Oahua - of course not; we were so well fortified - ? - Well, something went wrong somewhere, evidently. Honolulu was caught sleeping and a most terrible thing happened here last Sunday."

Ella recounts how she left her quiet morning shift at the hospital that day to attend 8 a.m. mass and that she was in church when the attack began. Ella then rushed back to the hospital and she relates the events there that day. She then discusses the differences in Honolulu now that the area was under martial law.

Ella describes the how the hospital nurses "have rallied to the age-old call of service, and probably have the same spirit that prompted old Florence N[ightengale] to go to Crimea."

The letter ends with:

"We are all well and busy - it gives no time to think, so it is better that way. There is lots to do and Honolulu has quieted down to something one would never recognize, but we are all in this war. Things don't look any too cheerful, but we aren't going to let it get us down."

On this 75th anniversary of the "day that will live in infamy", the Women Veterans Historical Project salutes the service of military nurses.

You can read the entire letter below: 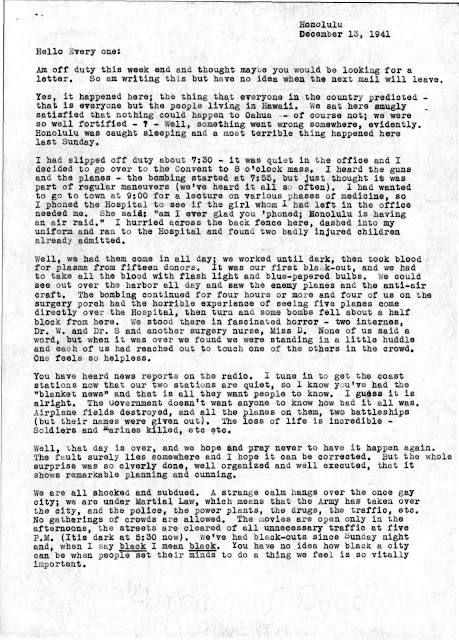 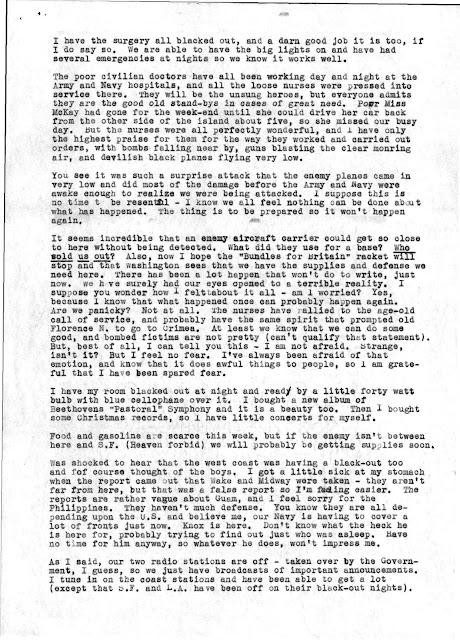 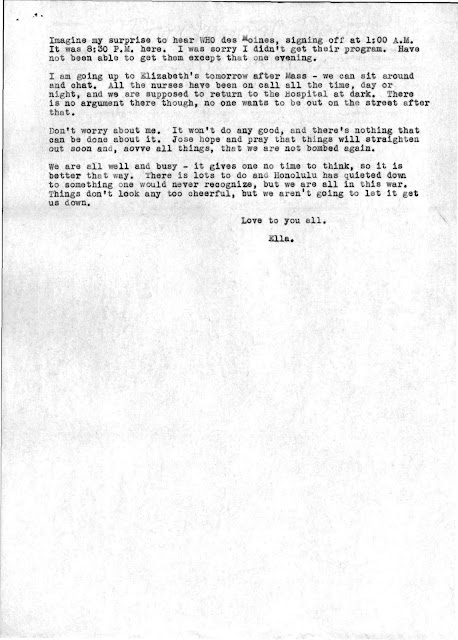