This week's story focuses on an early graduate of the North Carolina State Normal and Industrial School (now UNCG), Ms. Margaret Gash. Margaret Avery Gash of Pisgah Forest, North Carolina, was one of State Normal's earliest graduates, having earned her degree in 1895. According to the Graduation Excercises booklet from 1895, her graduate thesis was titled, "The Development of Woman's Educational Ideals." Indeed, Ms. Gash tried to form a career in teaching after graduating from the State Normal, but she did not find much success in her first career choice. In an article published in the 1943 edition of Alumnae News, Gash states humbly, "...the teaching profession, for some reason unknown to me, seemed perfectly able to dispense with my services." Fortunately for Ms. Gash, "the Library world to which I next turned was kinder." After she left the teaching profession, she attended Pratt Institute Library School in Brooklyn, New York and gained her Certificate in 1900. At some point she also attended Melvil Dewey's Albany Library School. If that name sounds familiar, it's because he's the inventor of the Dewey Decimal System! Thereafter she worked in public libraries until she got a job offer at an institution at which she would serve for the rest of her career.


Ms. Gash began working at the Metropolitan Museum of Art in 1906. She was tasked with organizing, cataloging, and indexing a mountain of correspondence, reports, minute books, wills, and contracts connected both with the history of the institution and its collections of art. She helped to devise a system of cataloging objects which would prove helpful to the museum in the same way a catalog of books is to a library. This "experiment" as Gash called it, began with her working on it part time, then full time, then she gained an assistant, and then finally she ended up with a group of five to six assistants working under her. With the years, her experience grew, and her final title when she retired was Chief Cataloguer. Ms. Gash retired in 1945, having worked at the Metropolitan Museum of Art for 39 years. 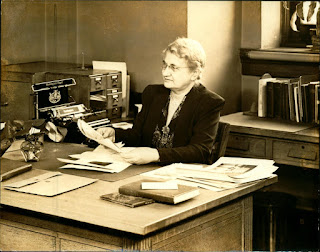 Ms. Gash's work has been cited in articles on librarianship and museum collections, ranging in date from 1970 to 2014. The work she performed at the Metropolitan Museum of Art was part of a ground-breaking effort to systematically record holdings and information related to objects in museum-like settings. All this occurred at a time when modern library science was in its early years, as Melvil Dewey had opened the first library science school in America at Columbia University in 1887. Margaret Avery Gash passed away on September 9, 1950 in Pisgah Forest, North Carolina.
Posted by Scott Hinshaw