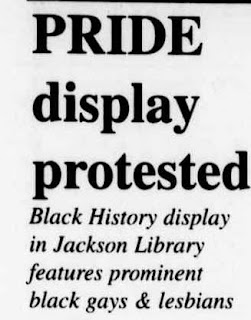 When reflecting upon events that serve as vehicles for social consciousness, a library book display is unlikely to rate as an impactful medium to facilitate and stimulate dialogue relating to controversial topics. Such displays are passive and frequently overlooked. However, a book exhibit installed in Jackson Library, at The University of North Carolina at Greensboro, launched the student body into a critical discussion relating to gender, sex, and ethnicity.

In Jackson Library, PRIDE!, the LGBTQ student organization on campus at the time, constructed a book display, featuring queer African American authors and entertainers in honor of Black History Month in February of 2002. The exhibit, titled “Dark Shadows, Deep Closets,” communicated the conflicts faced and achievements earned by LGBTQ individuals in the Black community. The display consisted of books from the library collection that focused on homosexuality and ethnicity, as well as contained photographs of significant queer figures in African American history. The exhibit counts as among the first public initiatives on the UNCG campus exploring the intersectionalities of race, sex, and gender.

The display immediately attracted attention. The library received over a dozen phone calls objecting to the exhibit within the first day. The officers of the Student Government Association were bombarded with so many complaints that there was fear PRIDE!’s funding was in jeopardy. The student newspaper, The Carolinian, devoted extensive coverage to the student body’s reactions to the exhibit and the evolution of the discussion, beginning with race, transferring to money, and ending with politics.

In the first week of the display, campus opinion very much focused on sexuality and race. Interviews in The Carolinian featured the opposing positions, revealing the struggles encountered by LGBTQ individuals in the African American community. A student protesting the display, stating “This is black history month and that’s something to be proud of… And gays ain’t something to be proud of.” A member of PRIDE! From Greensboro College (who is identified as a gay African American male) maintained, “We’re celebrating Black History month by showing people another side of it. I would never say anything derogatory about black American homosexuals…”

As discussion about the display and the role of PRIDE! as an organization continued throughout the month of February and into March, the subject matter transitioned from race and sexuality to that of money. The argument opposing the funding of PRIDE! with student fees has been debated for decades. Several students viewed the conflict brought about by the exhibit as an opportunity to revisit the issue. One student argued that, “relatively few students are concerned with issues relating to sexual orientation until they are brought up by groups like PRIDE!. So to say that we as students should pay for a group supporting an issue we are unconcerned about – I really don’t agree with this.”

However, some students saw PRIDE! not as a student organization devoted to creating an inclusive campus environment for students of all sexualities and genders, but as a platform for spreading political ideology hiding behind a civil rights-oriented student organization. In a letter to the editor of The Carolinian, the most vocal opponent against PRIDE!, Jason Crawford, argued that “PRIDE uses the homosexual issue as a shield to insulate themselves from critics that might otherwise have something to say about their increasingly radical left-wing agenda.” Crawford maintained that PRIDE!’s support of “anti-war rallies” and establishment of “forums that question our government were initiatives intended to deliberately provoke politically conservative students. He called for the SGA designation of PRIDE! as a non-budgetary organization in order that student organizations be held to a high “standard of accountability. Therefore student groups that receive money from students should make reasonable effort to not offend significant numbers of students.” 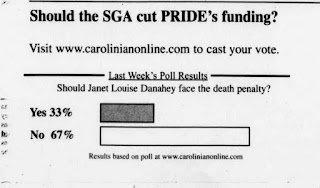 In spite of vocal opposition, the story ends with the exhibit remaining in Jackson Library through the month, PRIDE! keeping its funding, and the launching of a much needed discussion relating to sexuality and gender in the campus community. This entire event took place during a time UNCG was introducing several initiatives to make the campus more inclusive for sex and gender diversity, including Safe Zone Ally training for staff and faculty and the inclusion of a statement of nondiscrimination based on sexual orientation in the UNCG policy manual. Perhaps the greatest indication of progress can be viewed in that PRIDE! and University Libraries recreating the display for Black History Month in 2013 without any complaints. Who would think a book display in the library could stir such progress?
Posted by Stacey Krim