For 43 years, Cornelia Strong served as a professor of mathematics at the school now known as UNC Greensboro. During her time on campus, the school changed from State Normal to the North Carolina College for Women to the Woman's College of the University of North Carolina. She saw tremendous growth in the physical campus as well as the educational offerings for students. And when she passed away in 1955, she left behind a legacy that continues on the UNCG campus today. 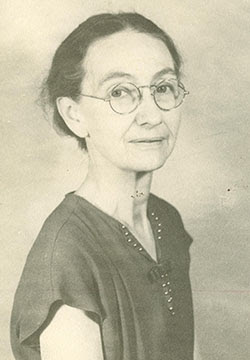 A native of South Carolina, Strong joined the State Normal (now UNCG) faculty in 1905, and worked diligently to prepare the women under her tutelage for a variety of careers. While most alumni entered into teaching, many mathematics majors found roles as "human computers" in the National Advisory Committee on Aeronautics (NACA) and later the National Aeronautics and Space Administration (NASA) (see this story about 1930 graduate Virginia Tucker, who served as the "head computer" at Langley in the late 1940s).

Strong received her educational training at Cornell University, where she received her Bachelor of Arts degree in 1903 and was elected to membership in Sigma Xi, the national honorary society for distinction in science. Soon after, she arrived in Greensboro to begin teaching at the State Normal. But she continued her education through summer schools at a number of universities, including California, Colorado, and Wisconsin. In 1931, she completed her Master of Arts degree in Mathematics and Astronomy at the University of Michigan.

That same year, she began teaching the first courses in Astronomy at the North Carolina College for Women (now UNCG). Dorothy Yarbrough Zimmerman (Class of 1935) was one of six students in Strong's astromony class in 1934. She noted, "visions come to mind now of the frail but dynamic body of Miss Strong, ever clad in her characteristic shoe top length skirts and plain black lace shoes, meeting us on campus at 4 am, lugging and setting up the telescope in order that we might feel the thrill of observing Saturn's rings, Jupiter's moons, and craters of our own moon."

In addition to teaching, Strong served on a number of critical campus committees. Perhaps the most significant was her role as chairman of the Committee on Advanced Standing, a position she held from 1913 through 1937. This committee was tasked with evaluating the academic records of alumnae from the earliest years of the school (before accreditation) to determine how much work would be needed to meet current degree requirements. As noted in one tribute to her after her death, this leadership position was particularly difficult as "it required good judgement, patience, and tact to maintain the standards of the college and at the same time preserve happy relations with these older alumnae."

Strong was also known across campus as someone who would go out of her way to help or cheer up her students and colleagues. She was frequently known to pick flowers from her own yard and deliver a small bouquet to new faculty members. Barbara Mangum Bowland (Class of 1951) recalled that, upon learning about her upcoming wedding, Strong made a special heel for Bowland's wedding slipper - a blue satin heel with a four-leaf clover pressed into it. Strong also enclosed a note that read "a bride must have something old - and something new - and a four-leaf clover in the heel of her shoe."

Upon her retirement in 1948, Strong was recognized by students and fellow faculty members as an "unforgettable individual," a "resolute and brilliant woman," and "a truly remarkable person." On June 3, 1955, at the age of 78, she passed away at Wesley Long Hospital in Greensboro. In a tribute to Strong read before the Faculty Council in November 1955, three members of the mathematics department noted, "in the hearts of her many students and friends, in the Mathematics Department and in the entire college community, Miss Strong will live for many years to come, an inspiring and gracious influence."

In 1960, a new residence hall opened on the Woman's College campus and was named in memory of Strong (as well as Mary Taylor Moore, a member of the Class of 1903 who served as registrar from 1909 to 1948). The building was renovated in 1994, and Strong College was officially established by the University's College of Arts and Sciences. Strong Colleges continues today (although it has been relocated to Guilford Hall) with a focus on "sustainability through hands-on research and fieldwork."
Posted by Erin Lawrimore