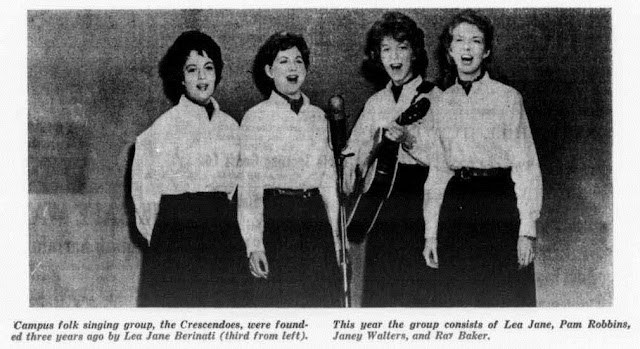 UNC Greensboro student music ensembles historically have been classically-based. Although Woman’s College can be proud of its very own all-female 1940s “big band,” the Darlinettes and Rhythmettes, it was not until much later in the school’s history that the music curriculum experimented with popular music. Consequently, what some might consider the state soundtrack of North Carolina, folk music, never seemed to insinuate itself into the daily listening of the greater student body.

A small group of students set out to change this during the 1962-1963 school year. Three students, Lea Jane Berinatti, Janey Walters, and Pat Bowen, were introduced at a meeting for a student music organization. They bonded over their love of folk music and formed a group. Pam Robbins, an interior design major, would eventually replace Pat Bowen who left to New York on a choir trip, and by the 1963-64 school year, one of UNC Greensboro’s early male students Ray Baker, a psychology major, would join the group. This quartet became known as the Crescendoes, the college’s first folk music group.

The Crescendoes wrote and arranged their own music in addition to performing well-known folk pieces and spirituals. Their most popular song was the spiritual, “Go Tell It on the Mountain,” but their own arranged pieces, “The Very Last Day” and “The Very Good Year” also were crowd favorites. By 1965, the Crescendoes released their first album, recorded by Copeland and performed throughout the Triad area.

Interestingly, once the Crescendoes graduated and moved on with their lives, no other student group stepped in to pick up the folk music tradition. Although folk music’s introduction to the UNC Greensboro campus was successful, the popularity of the genre decreased rapidly among students. When asked to gauge student interest in folk music, campus radio station employee, Class of 1964 alumna, and folk music enthusiast, Janet Hamer, reported that “Folk music apparently had decreased in public appeal on this campus. We had three programs last year, and attendance dropped off considerably at the third program. If enough students showed interest, we would continue the folk music series.”

So, why did folk music die on the UNC Greensboro campus? Hamer believed it happened for two reasons. The first is that the campus did not have the quality of the the particular types of musicians that could and would perform folk music. Lea Jane Berinatti was considered one of the top guitarists on the UNCG Campus, but of all the members of the Crescendoes, only she was a music major. As the National Folk Festival was centered in Asheville at the time and Greensboro was not known for its folk music scene, students on campus were not widely exposed to what might be considered authentic folk music. The second reason folk music never took hold on the campus, according to Hamer, was that folk music was becoming so commercialized by that time that few students knew what true folk music was supposed to sound like. That being said, she admits that “Some of the purists don’t sound very good to the untrained ears. We have a preconceived idea of folk music formed by commercial singers.”

Thankfully, the genre has been reintroduced successfully on the UNC Greensboro campus, and students now have access to quality folk music performances. In 2008, the UNCG Old Time Ensemble was created by Dr. Revell Carr with the mission “to give students an opportunity to learn songs and tunes that have been part of North Carolina’s culture for generations.” Additionally, in 2015, the National Folk Festival (now the North Carolina Folk Festival) began to be hosted in Greensboro, NC, giving everyone in the city the opportunity to cultivate a trained-ear for folk music.