Chronicling the Founding of the UNCG LGBT Student Organization (1971-1975)

Although our University enjoys the benefits of a culture promoting equality and inclusivity, UNCG’s reputation for embracing diversity as an educational foundation was constructed over decades by student and staff advocacy. Among the more hidden stories of Civil Rights struggles at UNCG is that of the formation of a university-acknowledged student organization for LGBTQ students.

There are few records on the lives and activities of the University’s LGBTQ students, but the first evidence for the need of such an organization on campus can be found as early as 1971. By this time, the university had been reorganized as a co-educational institution, and although there is some evidence of a lesbian student population on campus for several decades (1), discrimination against gay male students provoked the first plea for tolerance in the student newspaper:

Last year it was decided by some members of the fraternity and a few other males that their image was being threatened by the gay men on campus. It was felt that those gay men were becoming too blatant to be tolerated. They had the audacity to be themselves occasionally...

There was some talk among the homosexuals of starting a gay liberation movement here at school. When this “uppity” talk reached the ears of the other men they decided to act. They all got drunk and set about threatening people with violence. (2)

It would be unlikely that the victims of such bullying would be willing to report threats, as homosexuality was not (and still is not) a protected class of minority by state law. Additionally, as homosexuality was officially classified as a mental disorder by the American Psychiatric Association during this time, there was no pressure for University officials to investigate such situations.  However, the landscape for gay rights shifted in 1973, when the APA removed homosexuality from the list of diagnosable mental illnesses. It did not take long for LGBTQ students to organize, and by 1974, a “gay political social group” was forming on campus.

In November of 1974, a flier promoting the first meeting of a gay student organization was attached to a bulletin board in the School of Music. This flier was brought to the attention of Jim H. Allen, Vice Chancellor for Student Affairs and Chancellor James S. Ferguson. In a letter to the Office of the UNC System President, Bill Friday, Allen requested for legal advice, asking: 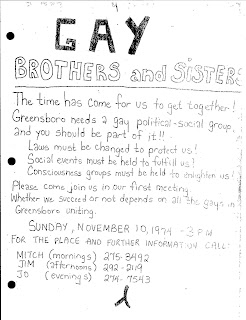 The documentation formally requesting the recognition of the Gay Student Union of the University of North Carolina at Greensboro was submitted and approved in 1979, with Rev. Joe Flora, Presbyterian Pastor for Campus Ministries, as the faculty adviser. The stated mission of the organization was:
The initial meeting of the Gay Student Union occurred in September 25, 1979, but the first meeting as a university-recognized organization occurred one month later, on October 25th. (3-4) Unfortunately, there is not a record of the founding members of the organization, but the initiative of these students established a network of support for LGBTQ students that has lasted over 30 years.

The Gay Student Union underwent many changes and overcame many obstacles over its history. The organization encountered many challenges through the 1980s well into the 1990s, but the struggles have led to the cultivation of a campus culture of support and advocacy. In fact, the 2012 Homecoming included the first homecoming for UNCG’s LGBTQA Alumni. As stated by attending Alumni, it was their first “homecoming-out.”