The history of UNC Greensboro (UNCG) is one of innovation and excellence. These qualities have helped to inform the planning of its academic programs, the recruitment of its faculty and students, and the design and construction of its buildings and classrooms. Needing to effectively respond to the technology and information revolutions of the late 20th century, the University embarked on an ambitious building campaign to renovate existing spaces as well as to design classrooms and housing to support and expand new ways of learning. The Moore Humanities and Research Administrative Building (MHRA) is a wonderful example of the University’s efforts to meet the needs of higher education in the early 21st century.

To finance these capital improvements, a $3.1 billion Higher-Education Bond Issue was voted on and approved by North Carolina voters in November 2000. UNCG received $166 million to pay for three new buildings and for major renovations on 15 other campus buildings. On March 24, 2004, the University held a dual ground-breaking ceremony for the $16.9 million MHRA building and the $16.6 million Gatewood Studio Arts Center. Chancellor Patricia A. Sullivan declared to attendees that “excitement and promise are in the air as we take the next step in the bold transformation of the campus.”

Soon after the March 24 groundbreaking ceremony for the MHRA Building was held, fencing was installed at the Spring Garden and Forest Streets site. Construction for the MHRA Building would begin as soon as the current building (Park Gymnasium) that occupied the site was demolished. On March 29, 2004, bulldozers set about tearing the Park Gym down. It took several days to remove all the debris from the site. With ground now cleared, construction was started. 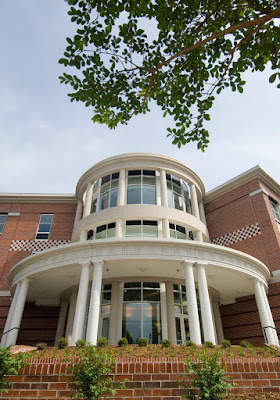 The three-story MHRA building would establish a visible humanities presence on Spring Garden Street. In fact, the building was specifically designed to bring together related academic departments to support teaching, research, and administrative functions. Functioning as a “hub” for the humanities, the building would welcome the departments of Classical Studies, English, History, and Language, Literatures, and Cultures. The structure would also include several administrative units. The administrative units included the Office of Contracts and Grants, Office of Technology Transfer, and the Office of Research and Engagement. Previously, these academic departments and administrative units were dispersed throughout the campus. Many of the humanities faculty and classrooms were housed in the McIver Building. Stories of faculty having to share a single office were common. The construction of the MHRA Building would help to ease a chronic campus space shortage by providing needed faculty offices and classrooms.

The Winston-Salem firm of Calloway, Johnson, Moore, and West designed the 86,000 square-foot building. They sought to translate “the traditional materials and architectural style of the University’s historic campus into an updated aesthetic.” The use of red brick and stone is a central feature. The building’s classically detailed rotunda draws the visitor into a light-filled atrium. While the exterior design was intended to play on the materials of the surrounding historic campus, the choice of materials for the interior of the building was intended to create a more “modern” and “corporate” look and feel. The design firm made heavy use of perforated metal and glass. They also used stainless steel and textured stone to mark important spaces and transitions within the building. All classrooms, conference rooms, and seminar spaces were equipped with audiovisual and digital projection equipment. Additionally, the teaching spaces were designed with close attention to acoustics and lighting to facilitate learning.

Construction of the building was completed in 2006. Faculty and administrators moved into the new building prior to the start of the fall term. On August 31, 2006, the University’s Board of Trustees named the three-story structure the Beverly Cooper Moore and Irene Mitchell Moore Humanities and Research Administrative Building. The Trustees sought to recognize the couple’s contributions to UNCG. The building was formally dedicated during the 2006 celebration of Founder’s Day (October 5, 2006). It was announced that Irene Moore was going to be giving $2 million to UNCG through the Students First Campaign to name the humanities building and to establish 16 graduate student scholarships. Her husband, Beverly, had been chairman of the UNCG Board of trustees from 1972 until 1975. Mr. Moore was a prominent Greensboro attorney who died in 2001.
Posted by Unknown