Behind the Scenes of State Normal with Lula Martin McIver, part one

In a undated speech titled "The Educated Woman's Contribution to the Service of the State," Lula Martin McIver, widow of the State Normal and Industrial School's (now UNCG) founding president Charles Duncan McIver, passionately argued for the value of education for women in North Carolina. Her speech echoes many of the sentiments expressed at the founding of the school about the importance of educating women as a way of educating the populace as a whole. She stated, "since it is true that the child of today is the citizen of tomorrow, it may safely be claimed that the woman citizen of the state laboring in the home and school combines all four -- she rules all, prays for all, fights for all, and metaphorically and literally feeds all. Since she occupies such an important position in relation to the future citizenship of the state, it is of supreme importance to every state that she be properly trained for her great work." 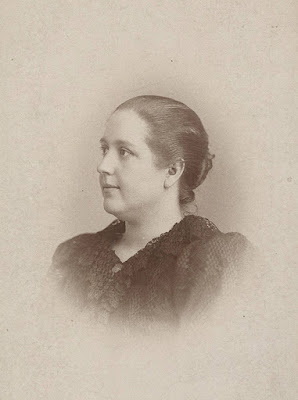 The fight for women's education is one that Lula McIver started as a young girl, developed further with her husband Charles, and continued until her death. Lula was born Lula Verlinda Martin in Salem, North Carolina, on June 8, 1864, to Dr. Samuel Martin, a dentist, and Verlinda Miller Martin, who had graduated with honors from Edgeworth Seminary in Greensboro. Young Lula grew up surrounded by books and scientific instruments, and dreamed of becoming a physician. But, in the 19th century, the path for women wishing to become medical doctors was almost non-existent. She attended the prestigious Salem Academy, graduating in 1881. Ultimately, however, she chose to pursue a career as a teacher over her dreams of becoming a physician.

She began her career teaching in a one-room private school and later in the Oxford Orphanage. Four years after beginning her teaching career, Lula met a fellow teacher named Charles Duncan McIver. In 1885, the couple married. Lula, however, retained her strong sense of independence and her belief "that a woman was an individual with a right to her own mind, her own property, her own privileges." She refused to wear a wedding ring as she believed it to be a symbol of the oppression of women (according to a 1940 Founder's Day address issued by the College).

Around the time of their marriage, Charles became heavily involved in local Teachers Institutes, which sought to provide professional training for educators throughout North Carolina. At the time, the state had no formal system for training its teachers, and funding for public schools was sparse. Lula was an essential part of the Institutes' success, doing everything from practice teaching demonstrations to scrubbing clean the local courthouses used as training sites.

Most of the Teachers Institutes took place during the summer months when the public schools were not in session. During the academic year, beginning in 1886, the McIvers both taught at Peace Institute in Raleigh. Lula also briefly held the position of "lady principal" at the Charlotte Female Institute (now Queen's University). During this time, Charles also contemplated leaving education for a career as a lawyer (a decision he ultimately abandoned). Lula joined him in studying the law "because her mind needed the constant stimulation of study and learning." Charles often told a story of coming home to find Lula "completely absorbed, lying across the bed with her chin in her hands, in The Legal Rights of Married Women in England." During her time in Charlotte, Lula studied with Dr. Annie Laurie Alexander, the first North Carolina woman physician to practice in the state.

Next week, we'll explore Lula McIver's role as the first lady of the State Normal and Industrial School as well as her continuing contributions to the development of the public education system in North Carolina.