Co-education: Through a Woman’s Eyes

This blog post was written by Brittany Hedrick, an undergraduate history department intern who worked in University Archives in Fall 2015. As part of her internship, she also conducted two oral history interviews -- one for the University Archives' Institutional Memory Project and one for the Betty H. Carter Women Veterans Historical Project.

In 1963 Woman’s College was officially renamed the University of North Carolina at Greensboro. This name change correlated with the decision to make all UNC system schools co-educational. There were several reasons for this new change. Parents and prospective male students sent letters insisting admittance to the school because of financial situations. Additionally, Woman’s College enrollment continued to steadily decrease and the state could no longer afford to refuse male enrollment. The decrease in enrollment was partly due to the University of North Carolina at Chapel Hill’s decision to begin admitting women as freshmen. 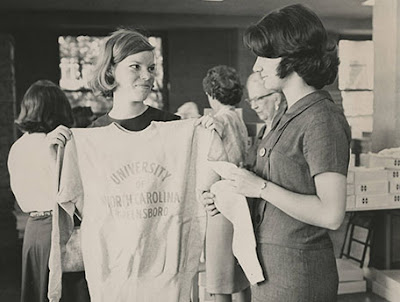 Opponents to co-education felt that female enrollment would decrease due to parents sending their children elsewhere. Some opponents felt that male applicants were apt to be rejects from Chapel Hill and State. Female students were divided on the issue, and reactions were mixed. Opponents and supporters of co-education took turns painting the McIver Statue pink and blue. In December of 1988, Maynard Southern spoke to the Greensboro News and Record stating, “Some resented the decision while others were pretty receptive.” In a 2006 oral history interview, Gail Hicks Fripp (Class of 1963) recalls feeling, “It would be the end of the university as we knew it…we thought we were equal to Ivy League Sister Schools. Many women thought it was going to be the end of the world, and there was no way we could fight it…so nobody protested.” In fact, public opposition was minimal and this might be due to the fact that women during this time period often did not challenge authority. They might have felt their voices would not be heard or their opinions would not matter. Some of these women had been following orders their entire lives.

Regardless of minimal opposition on campus, a large portion of women resented the change. This opposition was especially evident through Woman’s College alumnae. The 1974 summer issue of Alumni News illuminates alumnae opposition and states that initial reaction of alumnae in regards to male admittance were feelings of betrayal; a loss of ideals for which the institution once stood. Alumnae felt the presence of male students would ruin what was once a superior woman’s college. They believed the change would result in a loss of prestige and a decrease in woman’s participation. The alumnae regarded the pre-co-education time period as the “good ol’ days” when leadership potential was easier for woman to obtain while attending Woman’s College. Women feared leadership roles would fall to men and that women would gradually fall from faculty positions. Moreover, there were fears that co-education would bring demands for Greek life and football. 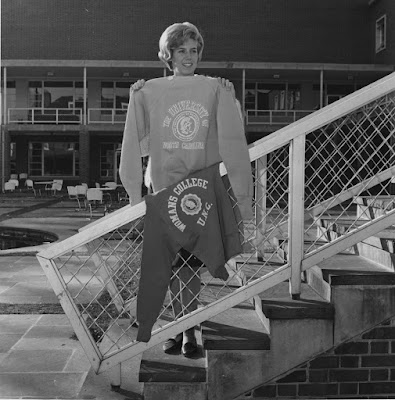 Opponents suggested the institution was shifting from a superior woman’s college to a mediocre university. In a 2015 oral history interview, Dr. Sue Medley (Class of 1965) stated, “There were different reactions, some people resented—to this day—but others were more accepting and realizing the need to perhaps to make some changes, but there was a culture and an atmosphere that was lost.” An October 1963 issue of the Carolinian student newspaper even stated that women were concerned about having to put rollers in their hair at night in order to be presentable for class and feared the loss of individuality and equality.

Although there was opposition and division among the female students in regards to the new changes, an increasing number of female students preferred co-education. The trend in American higher education was toward co-education nationwide; partly a response to World War II and the introduction of the G.I. Bill. Within this national trend, some opponents even compared single-sex education to racial segregation. Ultimately, co-education, to many, was simply an economic response to falling enrollments. For the University of North Carolina at Greensboro, co-education resulted in tripling enrollment. However, many student leadership roles previously held by women were held by men after co-education.
Posted by Erin Lawrimore