October 21-27 is North Carolina Archives Week, an annual, week-long observance of the agencies and people responsible for maintaining and making available the archival and historical records of our nation, state, communities and people. This year's theme is "Celebrating North Carolina Food and Culture." 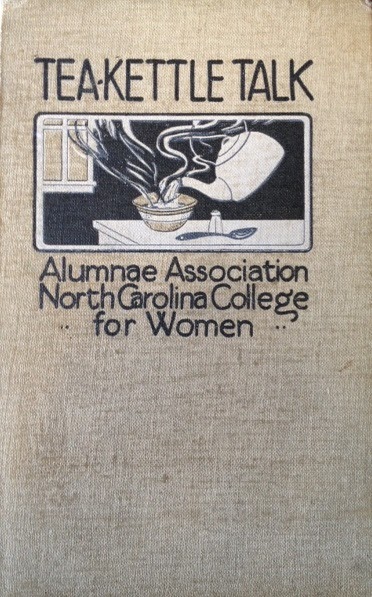 These lines from the Victorian-era poem "Lucile" by Owen Meredith (also known as Edward Robert Bulwer-Lytton) served as the preface to a 1924 cookbook published by the Alumnae Association of the North Carolina College for Women (now UNCG). The cookbook, titled Tea-Kettle Talk, was sold by the Alumnae Association for $1 per copy (an addition five cents for mailing). It collated recipes from the college's alumnae, faculty, and faculty wives alongside "suggestive menus for clubs," "simple table service suggestions," and "household suggestions." Many of the recipes hold titles that boast of being "my husband's favorite." Here are a few of the recipes that you might want to try for your next meal:

French Toast from Kathleen E. Pettit
Dip slices of bread in well-beaten eggs to which salt and pepper have been added. Drop the egg-covered bread in frying pan of hot lard. A cut of butter melted in the frying pan with the lard adds much to the taste. Turn the slices of bread at intervals until both sides are a golden brown. This is a good breakfast food.

Creamed Dates from Mary E. Coffey
Break white of an egg into a glass, add an equal quantity of ice water and one teaspoon vanilla. Beat until light, add little at a time enough powdered sugar to make a smooth fondant. Remove seeds from dates and fill with mixture. Half a walnut may be stuck in side of dates if desired.

And finally, for those looking for guidelines on table settings, Tea-Kettle Talk offers this guidance:

Cover the table with a silence-cloth and carefully spread the white linen over this. On an attractive centerpiece place a low jar or vase for cut flowers. Let the flowers be of one kind and color, as far as possible, without a heavy fragrance.
Place the napkins, carefully folded, to the left of the plates. In placing the silver, arrange it so that each piece shall come in the order for use from the outside toward the plate. Knives, with blades turned in, to the right of the plates; spoons to the right; all forks to the left, unless an oyster fork is used, in which case it should be on the right, with the tines resting on the plate. The plates, knives, forks, spoons, and napkins should be placed one inch from the edge of the table. The glass should be at the end of the knife-blade, and the salt should be placed in front of the plate.
The bread and butter plate should be at the end of the forks to the left. Soup ladles, bonbon spoons, and rest for carving set should be on the table.
Olives, almonds, celery, and bonbons are placed on the table.
Posted by Erin Lawrimore