Origin of a Goddess: Minerva on the Consolidated University era seal

During the period of the Consolidated University of North Carolina (1931-1971), a seal for the Woman's College of the University of North Carolina (now The University of North Carolina at Greensboro) appeared featuring an image of Minerva quite different from those previously used for the school's seal.
The seal appeared together with the seals of The University of North Carolina at Chapel Hill and North Carolina State University on official documents and letterhead from the office of the Consolidated University throughout this period.  The seal, by itself, was also used sporadically on items produced by the Woman's College such as Bulletins and Programs.
As has been discussed in previous blogs and exhibits, a wide variety of images has been used for our school's seal and unfortunately, we don't have much information on how many of these images came to be.  We still do not know who came up with the Consolidated University era seal, but we can now state that we know the original source of the image.
In the Louvre Museum in Paris, there is a Greek pot (Krater) dating back to about 460 B.C. This Krater, a form of Greek pottery used to mix wine and water, is an example of Attic red-figure painting. This particular Krater is the name vase of the Niobid Painter, so-called because of the scene depicting the slaughter of the children of Amphion and Niobe by Apollo and Artemis. The scene illustrates a central theme of the Greek world, Hubris, since Niobe had boasted that she had more children than Leto, mother of Apollo and Artemis. 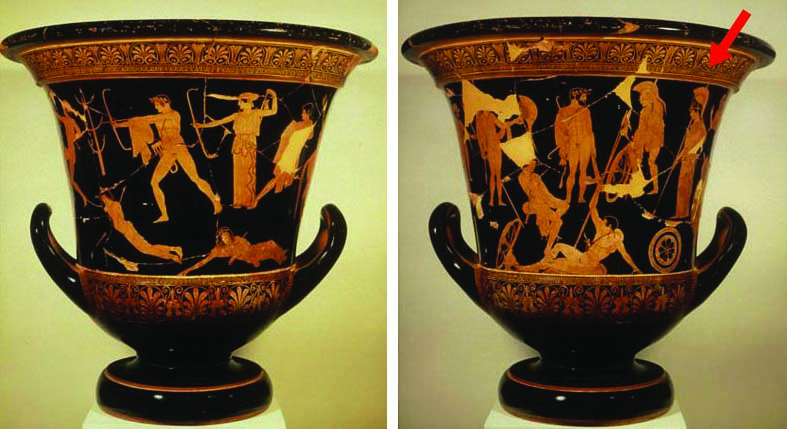 The Niobid Painter Krater, showing scenes on both sides

It is not the scene for which the Painter is named, but the scene on the opposite side (image on the right in the above picture), which reveals a familiar face (indicated with red arrow above).  It is a question of debate as to what this side of the Krater depicts, but there is no doubt about one particular figure.  Near the handles stands a robed figure of a woman, wearing an aegis (breastplate of armor) with the head of Medusa, a war helmet, and carrying a shield and spear.  Sound familiar? It's Athena, and it's the source of the image for the Consolidated University era Woman's College seal. The drawing taken from the Krater in the image below shows a better view of the goddess.1
﻿﻿ 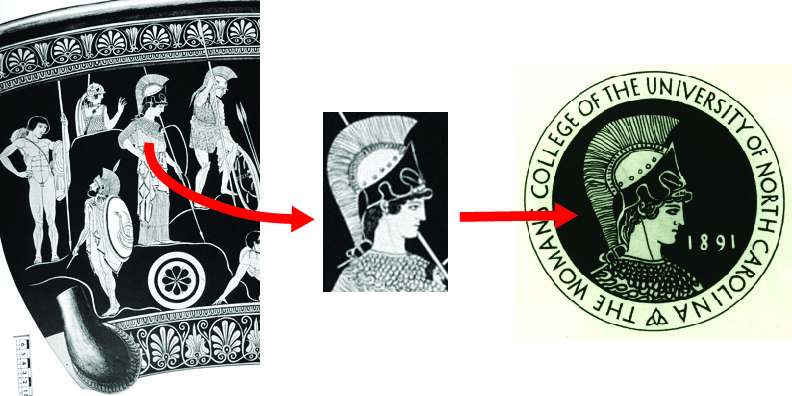 It's very clear that officials weren't aware of the origin of the image used in this seal. In 1963 when the official seal currently used by The University of North Carolina at Greensboro was adopted, long-time Registrar Hoyt Price curiously said, "the 1963 rendition of the university seal actually is more authentic in so far as Minerva is depicted, especially her headdress and the wreath around the figure."2

1-The Niobid Painter Krater is located in the Louvre and designated as Louvre G341; All Images used here of the Krater are from Tufts University's Perseus Digital Library
2- Quote is from "Today on Campus" October 2, 1983.
﻿