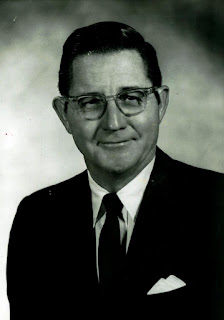 On Friday, October 12, 2012, former UNC President William ("Bill") Friday passed away at the age of 92. He had a great impact on all aspects of education in North Carolina, including the institution we now know as the University of North Carolina at Greensboro.

Friday's relationship with UNCG (at the time, it was Woman's College) began in 1951 when he was named Assistant to the President in the offices of the Consolidated University, which included W.C., N.C. State, and UNC Chapel Hill. His task, as outlined by President Gordon Gray, was to "work with and through" alumni secretaries at the three schools to plan and promote an annual alumni giving campaign.

In 1956, Friday was asked to lead an investigation into W.C. Chancellor Edward Kidder Graham. He brought together a panel of campus leaders (including university Vice President William D. Carmichael as chairman, acting Provost William M. Whyburn, and graduate school Dean William W. Pierson) to conduct hearings that lasted five full days. Over 130 individuals provided confidential testimony to the panel on Graham's leadership of the campus, and ultimately Graham was persuaded to submit his resignation effective at the end of the school year.

Soon after the hearings, Friday was tapped as the next President of the Consolidated University of North Carolina after Gray left for a position in the Department of Defense. His handling of matters at W.C. was cited as evidence of his ability to lead the organization. He was officially inaugurated on May 8, 1957 at a ceremony at Reynolds Coliseum in Raleigh.

Four years later, North Carolina Governor Terry Sanford created a Commission on Education Beyond the High School, which was headed by Winston-Salem lawyer Irving Carlyle. Friday was a member of this group, which became known as the Carlyle Commission. The Commission's report, published in 1962, predicted a near doubling of college enrollment in North Carolina by 1975 and called for a major overhaul of the state's higher education system. This report led the 1963 state legislature to create a community college system and elevate existing state-supported two-year colleges in Charlotte, Asheville, and Wilmington to four-year institution. These campuses joined the existing Consolidated University schools to form the UNC System.

Directly impacting W.C., all of the schools in the UNC system were to be made coeducational, and the name of the Woman's College was officially changed to The University of North Carolina at Greensboro. Most alumnae opposed the change, and the current student and faculty populations were divided. But ultimately the name change was made effective in July 1963, and the first male undergraduates were admitted to UNCG in Fall 1964.

During his time as UNC President, Friday supervised the consolidation and growth of all of the schools in the UNC system. He fought against a 1963 state-legislature-supported speaker ban, which would have forbidden all colleges and universities receiving state funds from bringing on campus a speaker who was "a known communist or who had pleaded the Fifth Amendment in refusing to answer a question about communist affiliation." He managed the System through the turbulence of the student and social movements of the 1960s and 1970s. And in 1986, after 30 years at the helm, Friday retired from his position as UNC President.

After retirement from UNC, Friday continued to be a champion for education, leading the William R. Kenan, Jr., Fund and serving as a founding co-chairman of the Knight Commission on Intercollegiate Athletics. He returned to UNCG as the speaker for the 1988 commencement ceremony. There, he stressed the importance of access to educational opportunities for all North Carolinians. Stating that (at the time) one million North Carolinians lived in poverty, and over 800,000 faced illiteracy, he implored the graduates to take responsibility to the quality of education in the state. Friday concluded his speech to the students, saying, "You must now take your place in that great tradition of responsible and useful citizenship to build an even stronger society where no child will suffer the bondage of poverty and illiteracy and no citizen will fail to know the joy of personal freedom, of reassuring self-respect and the integrity of his or her own person. This is your new assignment and it's going to take a lifetime of courage, of diligence and service."
Posted by Erin Lawrimore